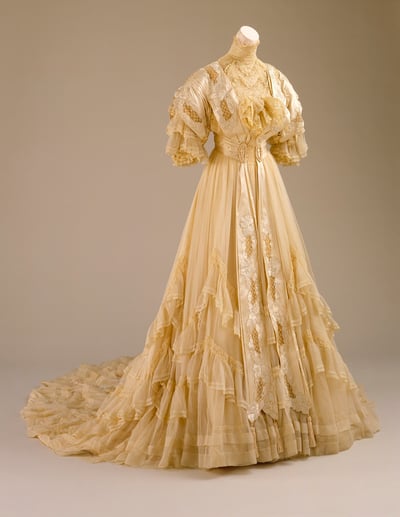 The Queen of a certain kingdom, needing a new evening gown by the end of the month, decided to hold a contest. She announced that whoever could create the perfect gown for her would receive a title of nobility, a parcel of land, and a sum of money.

Naturally, her decree set off a flourish of activity among all the designers and dressmakers in the land. Each worked tirelessly and spared no expense to create the perfect gown for the queen.

When the last day of the month arrived, more than a hundred designers and dressmakers brought their creations to the castle. The Queen’s advisors had been tasked with choosing two dresses for her to judge, and they spent three days examining the entries before making their selection. Finally, they announced their decision and brought two dresses, along with their creators, to the castle to meet with the Queen.

The first dress was from a woman who was widely renowned for her fashion creations. She was sought after by wealthy families from many kingdoms who commissioned elaborate and exotic attire for all occasions. The dress she had created for the Queen was lavish and resplendent. It had been crafted using the finest materials from far-off lands, including a particularly high-grade gold that was processed and used for embroidery thread. The Queen nodded intently as the woman explained the complex processes and incredible list of materials that had been employed in the making of the dress.

The second gown provided considerable contrast to the first. It was made by a young girl from a nearby village who was unknown to all but the local families in her region. She had designed her creation using only materials that were found in the area surrounding her village. He dress was simple yet radiated a natural elegance and beauty. The Queen listened intently as the young girl described in great detail how she had cultivated and blended natural materials into her work.

Finally, after conversing with the two designers and spending ample time studying their creations, the Queen was ready to pronounce a winner.

She began by holding up the dress made from rich and exotic materials. “I am particularly impressed by the elaborate design and construction of this dress,” she said. “It is unparalleled in its use of fine and rare and expensive materials. It is indeed an incredibly exquisite creation and perfect for any Queen.”

Hearing this, the woman who had designed the dress smiled broadly and gave the Queen a deep bow of thanks. Most of the Queen’s advisors and others attending the ceremony applauded and nodded their agreement. This dress, they thought, was created for royalty.

Next, the Queen turned to the simple dress created by the young girl. “But this dress,” she said with intense admiration, “is truly and specifically fit for the Queen of our kingdom. Its design is beautiful in the way that our fields and forests are beautiful. Its simple lines remind me of our rolling hills and and the flowing waters of our streams. Just as important, its materials come from the hands of our own craftsmen, people who understand the natural elegance of our land. And that is what moves me to choose this dress as the one I will wear.”

The wisdom of the Queen’s words resonated deeply with everyone. They had been mesmerized by the elaborate artistry of the first dress, but as they listened to the Queen, they realized that the perfect gown was the one that was an ideal representation of their kingdom and its people.

In learning, as in life, it is often best to forego the meaningless extravagance of distant contexts in favor of the real and personal beauty that already exists close by.

Virtual reality (VR) technology has been around for a few decades, but only in recent years has...
END_OF_DOCUMENT_TOKEN_TO_BE_REPLACED