Parable #1: Getting out of the Way 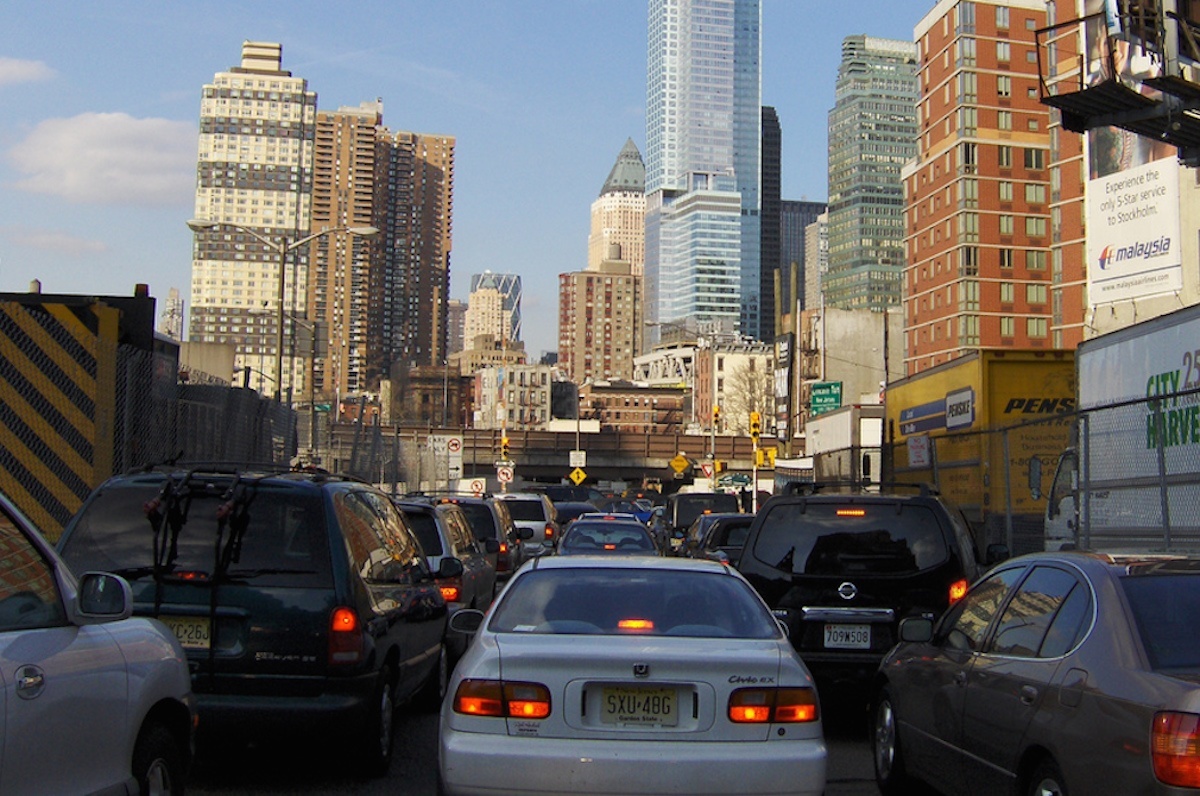 Imagine a man driving a rented moving van down a major highway that leads toward the downtown area of a large metropolitan area. It's a Friday afternoon. Traffic is picking up.

His destination is just south of downtown, an apartment complex where his sister-in-law and her new husband have decided to take up residence. He didn't volunteer for the job. His wife did. Volunteer him, that is.

There's construction on the highway. Four ample lanes on each side have been reduced to two. At this particular moment, the man is thinking about how he'd rather not be driving down a congested highway in a rented truck that seems bigger than the lane it's supposed to occupy. Particularly in the August heat and with nothing to listen to except his transistor radio that only gets AM.

He's about a mile from downtown, right at the point where the flow bottlenecks. Pretty much everyone who's going to duck out before reaching downtown has already exited.

And that's when it happens. That's when his engine dies. Just before he reaches downtown. When traffic is heaviest. In the hottest part of the afternoon.

The road construction has torn up the highway shoulder, so all the man can do is roll the truck to a stop. Block the right lane completely.

"Just my luck," he says, and pulls his cap down slightly.

It's only been seconds since the engine cut off but it's already feeling hotter in the cab. He switches off his transistor radio and rolls down a window. Dust streams in, along with the relentless honking of horns.

He eases the window back up and opens the glove compartment. He fishes around and eventually pulls out the rental agreement. He spots the roadside service number on the second page. "Nothing to do but find a pay phone," he says.

The man scoots over to the passenger side of the cab, opens the door, and climbs out. The truck is stopped just short of an overpass and there's a steep embankment he needs to climb in order to reach the civilization beyond the highway.

He works his way slowly up. Traction is tough to find on the dirt hill and he's forced to climb on all-fours in the steepest parts.

When he finally reaches the summit, the man looks around and discovers a convenience store just catty-corner from his position. He crosses the street, finds the pay phone, and makes his call. The people on the other end assure him they'll have someone out to help as soon as possible. He should wait in the truck, they say. It's the safest place.

"It's also the hottest," the man says, and then trudges back across the street. He pauses at the top of the embankment before climbing back down to his truck. He looks out over the span of the highway that winds into the hazy horizon behind his truck.

The man lets out an audible groan. As far as he can see into the distance, beyond the outer loop to the city, traffic has stopped completely. Complete gridlock.

"I reckon that help may take a little longer than they figured," he says.

He wipes sweat from his eyes, tugs at his cap and starts back down the dirt hill. When he reaches the truck, he takes a moment to look at the cars stopped around him. Their drivers wear looks of resigned frustration.

"At least they have air-conditioning," he says.

He climbs back in the cap of the van, rolls down both windows and switches on his radio. They're in the middle of a traffic report.

"Hey Joe," a female voice says. "What can you tell us about the crazy traffic jam over on I-30?"

"It's only getting worse, Allison," Joe says. "Inbound traffic is now backed up past the loop. At this rate, it could take hours to get this mess cleaned up. Right now, the police are even having trouble getting to the scene."

"Do we know what's causing the problem yet?" Allison says.

"Yeah, it appears that there's a stalled truck of some sort blocking the right lane on the inbound side, about a mile from the downtown exits. Between the size of the truck and all the construction, it's causing a really tight bottleneck."

"Wow," says Allison. "And on a hot Friday afternoon. I'd sure hate to be the person driving that truck."

I'm probably causing more trouble at this very moment than I've caused in my whole life.

He looks around again at the cars stopped around him. He imagines the growing resentment of the drivers and inches his frame lower in the seat. He begins to imagine their thoughts, their situations.

Someone is late getting home for a birthday party.

Someone is going to miss a critical business meeting at the end of the week.

Someone's anniversary plans are skidding off the rails.

Someone has flown home for a summer graduation ceremony but won't make it in time.

Someone's missing the birth of a grandchild.

Thousands of people, maybe tens of thousands before it's all over, are delayed. Their plans thwarted.

"All because of a stupid moving van," the man says. "I'm probably causing more trouble at this very moment than I've caused in my whole life."

He listens to his voice die away but the words remain. The echo in his mind.

"I'm probably causing more trouble at this very moment than I've caused in my whole life."

And that's when it hits him.

That's when the smile starts to break slowly across his face.

A moving van breaks down and he becomes King of the Road.

A simple accident and he alters the course of thousands of lives.

He is more powerful, at this moment, than he has ever been before.

At this moment, he might be more powerful than he will ever be again.

"At least until I get out of the way," he says.

There are two moments when instructors become most powerful in the learning process: 1) when they place themselves as obstacles in the learning network and block the natural flow of learner connections; 2) when they get out of the way and facilitate an optimized learning flow and maximize each learner's ability to create new connections in her/his network.

The coming college collapse and how L&D can help

END_OF_DOCUMENT_TOKEN_TO_BE_REPLACED

Virtual reality (VR) technology has been around for a few decades, but only in recent years has...
END_OF_DOCUMENT_TOKEN_TO_BE_REPLACED